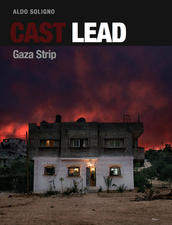 In his photo reportage, Aldo Soligno tells us about the consequences of the Gaza Strip war by focusing on the last Israeli army offensive named Cast Lead. His dark and full pictures of the recent catastrophe could speak about any war; and even if his eye has been caught by that specific place, what he wants to show us is what is left after a war. Suggesting that in people’s lives war is nothing but a humanitarian emergency, he stubbornly points out the uselessness of every war.
Soligno identified four tracks along the following matters: Dignity, Humanity, Knowledge, and Destruction. In his pictures, he uses several language formats: landscapes scratched by destruction and loss, portraits of people who lived the war on first line, video stills from very rare footage of fire days shot by Palestinian cameramen, and striking portraits of Palestinian journalists who documented those days in Gaza. Some interviews have been joint, in order to be better understood, and to report, in the own words of the people involved, how great sorrow and annihilation are generated by a war.
This is a work that can’t be simply reduced to a report. With this work, the author mainly wants to take a well-defined position about events that should be unacceptable and on which he expresses his deepest political and human considerations, leading the spectators on a journey throughout his pictures.