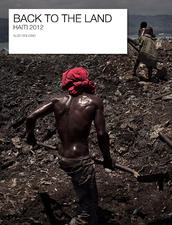 The small twin-engine plane can not fly very high, sometimes it almost looks like touching the mountains, and in those moments, when they are so close, you can see the “waves” that soil erosion has created on them. The impression is that the mountains are “melting” more and more after each rain.
Deforestation in Haiti is a historic problem started with the French colonization, but now the warning threshold has been greatly exceeded. Without trees, just a few inches of rain can transform the mountains in a mudslide which blocks the roads and sweeps away the seeds planted. Every year numerous are the deaths caused by these landslides, and malnutrition increases precisely because of the inability to cultivate these lands.
Recently, however, after many international organizations have called Haiti to a point of no return, both the government and much of the local population, with the help of international NGOs, are becoming aware of the problem. Several soil redevelopment interventions are being started and, encouraged by the excellent results, many farmers are mobilizing to increase the construction of retaining walls, which stop the crumbling of the soil; not only landslides are being prevented, in a few months these walls are allowing the same ground to return extremely fertile and productive. To the point that for the majority of Haitians, the same land that had brought them to their knees with the 2010 earthquake, is now becoming the greatest hope for the future.