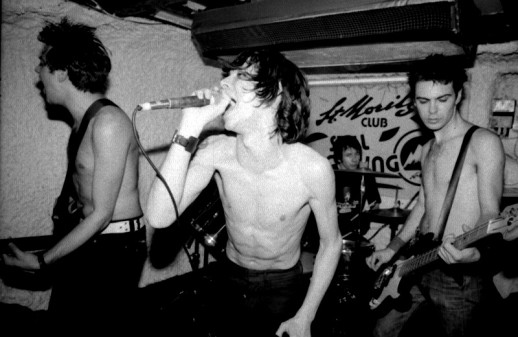 Legendary London punk band THE PARKINSONS return to London in support of the upcoming documentary about them “A Long Way To Nowhere” with a gig on Friday 11 December at The Finsbury, Manor House, 336 Green Lanes, London N4 1BY Advance tickets (strongly recommended) only £9.00

London. The dawn of the new Millenium. The Britpop party is over and the UK music scene is suffering from a severe hangover. The promise that Things Can Only Get Better now seems like a distant dream. Then, as if from nowhere, The Parkinsons burst onto the scene and give the music business a shot in the arm and a kick up the arse.

Singer Afonso, guitarist Victor, and bassist Pedro, met in their home town of Coimbra, Portugal – land of Madeira, Catholicism and boredom. Relocating to London, in search of adventure, they teamed up with fiery Scottish drummer Chris Low.

They swiftly built a reputation for chaos, revealing their penchant for getting naked on stage and attempting to abuse anyone or anything that refused to worship at their altar of rock’n’roll damnation. In the shadows, The Libertines and Razorlight were taking notes.

Having conquered London, The Parkinsons were unleashed onto the rest of the UK, receiving ecstatic responses and rave reviews wherever they went.

By 2002, The Parkinsons were plastered all over the press, radio, TV, and every major UK music festival – upsetting everybody from venue staff to The Queen in the process. Undeterred, Japan welcomed them with open arms and snapped them up for the longest tour ever undertaken there by a Western band.

The Parkinsons’ story is extraordinary. But was their journey just a long way to nowhere? Find out in this unique, hilarious, moving and ultimately deeply human story of maximum rock’n’roll, the likes of which we are unlikely to see again.

The London premiere of A Long Way to Nowhere will be at The Prince Charles Cinema, on Monday 14th December, 8:30pm. Tickets £12.50. This will be followed by an after-party at the St Moritz Club in Wardour Street.

A Long Way to Nowhere is compiled from hundreds of hours of incredible, intimate fly-on-the-wall footage along with interviews with the band and other key player

The Dirty Water Club started in October 1996 in the Tufnell Park neighbourhood of north London, at a venue called The Boston. The club’s name is derived from The Standells’ 1966 hit ‘Dirty Water’ which glorifies the US city of Boston, Massachusetts.

Past performers have included The White Stripes (voted by Q Magazine as one of the top 10 gigs of all time, Mojo one of the top 30 and Kerrang one of the top 100!), The Gories, NOBUNNY, Kid Congo Powers (from the Cramps), The Fleshtones, Billy Childish, Radio Birdman, The Dirtbombs, Thee Michelle Gun Elephant, The 5.6.7.8’s, The Horrors and The Brian Jonestown Massacre to name just a few. The club has also seen some original ’60s performers, such as The Monks, ? and the Mysterians, Kim Fowley, Sky Saxon, GONN, Michael Davis of the MC5 and more grace its stage.

Their in-house record label, Dirty Water Records, is one of the leading garage/beat/(real) R&B labels in the world.