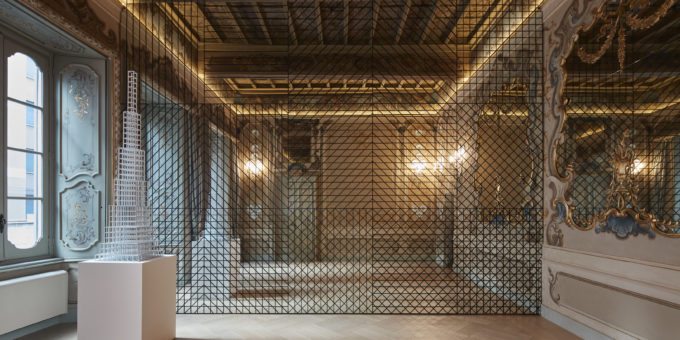 From November 17, 2017 to June 23, 2018 the Fondazione Carriero is pleased to present Sol LeWitt. Between the Lines, an exhibition curated by Francesco Stocchi and Rem Koolhaas and organized in close partnership with the Estate of Sol LeWitt.

One decade after the death of Sol LeWitt (Hartford, 1928 – New York, 2007), Between the Lines aims to offer a new perspective on the American artist’s practice, exploring its confines—though always adhering to the underlying norms and principles of his ideas—and singling-out the most interesting moments of the method of investigation and the processes that may arise. With a considerable body of work spanning his entire career—from 7 famous Wall Drawings to 15 sculptures like Complex Form and Inverted Spiraling Tower, up to the photo series Autobiography—and starting from the peculiarities of the rooms at the Foundation, the exhibition explores the relationship between LeWitt’s work and architecture.

Between the Lines is based on a powerful and innovative key to interpretation, aimed above all at reformulating the idea that a work must adapt to the architecture, thereby challenging the very notion of site-specificity. With the collaboration by the architect Rem Koolhaas—as a curator, for the first time ever—in dialogue with the curator Francesco Stocchi, Between the Lines faces broad aspects of LeWitt’s oeuvre, with the ambitious goal of moving beyond the division that traditionally separates architecture and art history and which characterizes the artist’s entire body of work, aimed more at the process than at the final result, free from any aesthetic or idealist opinion.

In 1967, LeWitt published in the magazine Artforum his “Paragraphs on Conceptual Art”—considered, even today, fundamental to understanding conceptual art—decreeing the importance of the idea over the execution, thus attributing more relevance to the notion, to the process rather than to the object and, therefore, marking the beginning of a gradual reduction of the artwork to an elementary state. In this text, LeWitt coins the term “conceptual,” paving the way for an idea of art and a way of working that was—and still is—important for generations of artists. The artist’s task is to formulate the project, whereas its execution can be entrusted to anyone, provided the instructions be respected. His belief in the artist as the creator of ideas adds a new dimension to his role, likening it to the figure of an architect who creates a design for a building and then entrusts its construction to others.

Yet, the theory LeWitt professed is vaster than imagined: it is the certain, measured degree of randomness established by the individuality of the one who will execute the work to expose it to the pathos of artistic creation, to the sense determined by the inner coherence of the linguistic system and, therefore, by the method and not the result per se. Moving freely within the rules. Like when, for example, in commemoration of his friend Eva Hesse, the artist introduces “non-straight lines” in his Wall Drawings and abandons himself to the understanding (and the interpretation) of the one who executes, further reinforcing a disinterest for any form of aesthetics in favor of respect for rules, thus making his works immortal since they can renew themselves each time.

At this point the role of architecture (and of the architect) becomes part of assessing LeWitt’s work, not only for the affinity in planning ideas but for the ability both have to reshape space. Sol LeWitt’s works cannot be considered sculptures or paintings or even architectural structures. Instead, they are Structures, forms inserted into the space, taking shape midway between the two-dimensional and the three-dimensional. Their geometric regularity makes them perfect “bases” for his wall drawings—multiplied, transformable into patterns, and repeatable in an infinite number of white, black, or colored shapes, either solid or open. These forms reveal their loyalty to flat images while at the same time they challenge gravity, triggering a reflection that joins wall paintings and sculptures, thereby creating an access between “dimensionality” and “construction.” Many of these figures are oblivious to their surroundings and their features; they cross doors and walls, thus creating continuity in the architecture without being conditioned by the specificity of the place in which they develop. Therefore, they cover the entire history of wall painting. The work is imbued with that location, though it wasn’t necessarily conceived for it, and, thus, it reveals a new metaphysical space made not with lines, cubes, or other geometric shapes, but with the idea of those very lines, cubes, and shapes.

The exhibition at the Fondazione Carriero stems from the desire to explore the confines of LeWitt’s work, considering his postulates as part of a new and freer system of verification, and to propose new harmony between the three-dimensional figure and the two-dimensional surface.

Between the Lines is an integral part of the program begun by the Fondazione Carriero with imaginarii (September 2015), FONTANA • LEONCILLO Forma della materia (April 2016), FASI LUNARI (October 2016), and PASCALI SCIAMANO (March 2017), exhibitions curated by Francesco Stocchi whose focus is their exchange approach and constant strive for research and experimentation.

The exhibition is made possible thanks to a close collaboration with the Estate of Sol LeWitt and to loans from prestigious public institutions, like the Whitney Museum of American Art (New York), as well as important private collections, like the Collezione Panza.

The Wall Drawings on display at the Fondazione Carriero were executed in collaboration with young artists and students in Milan, under the close supervision of the Estate of Sol LeWitt.

The show will be accompanied by a catalogue (Italian/English), published by the Fondazione Carriero and edited by Francesco Stocchi, which gathers images of the works installed at the Foundation, with contributions by the curators Francesco Stocchi and Rem Koolhaas, a scholarly text written for the occasion by the architect and art historian Adachiara Zevi, and a previously unpublished biography, illustrated with personal and archive images, many of which have never been seen before and compiled for the publication by Sofia LeWitt, the artist’s daughter. The catalogue will be available after the opening of the exhibition.